I write this on a day that is poignant – January 28th – 27 years after the Challenger Space Shuttle Disaster. At this time every year I remember the crew who lost their lives on that day including Christa McAuliffe – the first teacher in space. Christa was a credit to the teaching profession and wisely said:

I touch the future… I teach.

She was always a teacher, never an astronaut, and intended to go back into the classroom as soon as the mission was over because as she put it, “Otherwise, what would be the point?” Everything she did was for the children. She wanted to inspire pupils and teachers across the world to learn more about space.

Christa was selected to go into space as part of the ‘Teacher in Space’ program run by NASA and the US Government in the 1980s to send “one of the nation’s finest, a teacher, into space” (would we hear teachers being described like this in 2013?). A teacher called Barbara Morgan was also selected as Christa’s ‘back-up’ and went through training at NASA alongside Christa and the crew. On January 28th 1986 the world watched in horror as 73 seconds after blast-off Challenger exploded, killing all seven astronauts. Barbara Morgan still believed in the importance of education and the ‘Teacher in Space’ programme and worked tirelessly to promote the important work. As she put it:

When I started teaching Year 5 I wanted to extend our ‘Earth and Moon’ science unit to look at space exploration and in particular a person who had been into space. To me the person in focus was obvious; I decided against Neil Armstrong and Yuri Gagarin and opted for Barbara Morgan, here’s why:

Barbara Morgan is one of the most inspirational teachers I have come across. Not because she has been into space, but because she passionately believes in education. After Challenger, she continued her work with NASA to promote education, while returning to the classroom. In 1998 she became an ‘Educator Astronaut’ and in 2007, twenty-two years after she was selected as a ‘Teacher in Space’, she flew a space shuttle mission to the International Space Station and streamed lessons live into classrooms across the USA. When asked about her wait to go into space she replied:

A lot of people talk about teaching being instantly rewarding – small day-to-day things in the classroom do make you smile. But you don’t get instant gratification because teaching does, indeed, take patience and perseverance; your heart has got to be in it. I love my job and I love it the most in the summer term. Not because it’s nearly time for summer break but because you have an amazing rapport with your class and you can see how far they have come. That certainly is not instant gratification.

I have known I wanted to be a teacher since I was aged 6. I was told to raise my aspirations and work in ‘computers’ because I was good at that. I could have earned more money doing that apparently. But I don’t do it for the money and that’s what non-teachers find hard to understand. Teaching is a calling. Even with the assessment regime, the administration and the jumping through hoops – that is not important – inspiring children and the future is what matters.

That’s why I wanted my class to learn about the work of Barbara Morgan. Because I wanted them to know that teachers do great things and that only a teacher would know how much receiving this would inspire a group of Year 5 children: 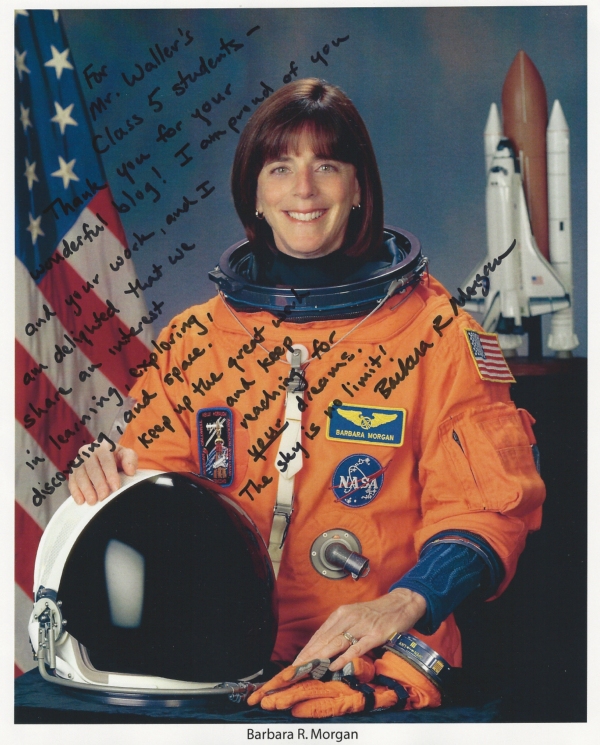 Message sent to my class by NASA Astronaut and ‘Teacher in Space’ Barbara Morgan.

Thank you Barbara Morgan for being such an inspiration to me and my class. In a time where criticism is rife towards the teaching profession, it is important to remember just how incredible teachers are and how they do amazing things every day. I am proud to be a teacher and I will be a teacher for many years to come.

This site uses Akismet to reduce spam. Learn how your comment data is processed.