Some of my research has been published in various articles and book chapters, primarily focused on social media in education.

‘Everyone in the world can see it’ – Developing pupil voice through online social networks in the primary classroom.

In this chapter I explore the ways in which social media can be used in a positive way to promote student voice within an online community of practice. This includes an exploration of the use of Twitter in the primary classroom as a way of engaging children in real world meaning-making while learning safe practices within an online social network.

As part of focussing on the development of traditional writing and new literacies, I described how I have used the social networking system Twitter with my Year 2 class as a means of engaging children in evaluating and reflecting on their own learning. Its use has created a greater understanding of real world literacy and helped develop digital literary skills within this online community of practice.
Available to view here.

More than Tweets: Developing the ‘new’ and ‘old’ through online social networks

This chapter focuses on work presented at the ESRC seminar series Children’s and young people’s digital literacies in virtual online spaces and focuses on the ways in which social networking sites have fundamentally changed the areas of social participation and communication for many people in today’s society. However, as with any new technology a dissonance has grown between home and school practices of such networks. ‘Schooled’ use of such systems confines communication and networking to tightly controlled virtual learning environments (VLEs), while out-of-school use is characterised by global networks where identity is affirmed within an online community of practice. This chapter explores how the use of a real social networking site (Twitter) can be used in a safe way to support the development of both traditional and digital writing.

This chapter draws upon work I presented during my keynote presentation at the University of Tasmania in September 2011. It explores ways in which new technologies have fundamentally changed what it mans to be literate in society in relation to new literacy studies and multiliteracies. It then reports data from a study which explores the use of classroom blogs to develop new literacy practices in the primary classroom. 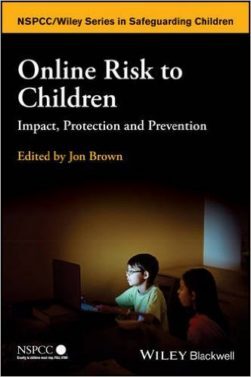 The Role of Schools in Children’s Online Safety

I was asked to write a chapter for the NSPCC to explore the role of schools in children’s online safety. The chapter explores the context of internet safety from a theoretical point of view as well as the ways in which the internet has changed home literacy practises. As well as discussing the role of the school,  I also share examples of research carried out in classrooms based on using the internet safely and promoting a proactive rather than reactive approach to e-safety.